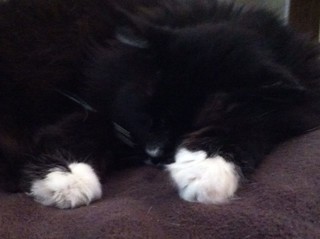 The day I met her she burst out of a crate, puffed up into a large 1 lb. ball of defiant fur and hissed her displeasure at a very surprised German Shepherd.  Thelma remained curious though a bit taken aback by the sheer hubris of this uppity, fluffy snack.  Her sister, who later became known as Sage stood meekly behind her looking on.  This was Hodi 호랑이 (Holang-i) or more accurantely 검은 호랑이 (geom-eun Holang-i) – the black tiger – named by an ex who spoke Korean fluently and clearly wanted to trip everyone up who happened to possess a tongue

After trying to pronounce the name time and time again (which to me always sounded more like Hodang-i) a friend suggested “Hodi” – much much easier.  And that was the first of many names for our little fussy fuzzy 호랑이.

Hodi was an oddly shaped girl – a type of Manx called a “rumpy.” She was rather round with two oddly placed tiny back legs.  We finally saw an x-ray of her spine last week and some of the way she moved (which was to hop more than run) was due to a compressed lumbar vertebrae right near her teeny tiny tail. Not a big problem when you’re an agile kitten, but something that affected her more as she grew older especially over the last year.

As the fluffy one, people gravitated towards her – hands outstretched.  She got to the point where she really couldn’t be bothered with strangers and tended to hang back on top of a chair lest those hands muss her fur.  Quite the opposite of her sister Sage who merrily greeted each new person at the door, letting them know, “hi! I’m available for all petting! Right here! I’m down here! Hello, I’m very friendly! Nice lap! Hey there, do you have hands? – psst, please take me away from here.”

Where Sage would go insane for a laser pointer, Hodi would only dain to slap it a bit if it were directly in front of her paws.  No need to get worked up for a light that’s impossible to catch.  Although, sometimes she’d forget and move a whole foot or two just in case her “it’s just a light” theory was wrong.  She wouldn’t want me to mention this, but on rare occasion she’d roll over trying to catch that light.  Of course, she’d quickly realize how undignified that was and then defiantly stare directly at me as I tried to entice her to roll one more time.

For her first two to three years she couldn’t quite figure out laps. They were oddly shaped  and seemed to come apart at unpredictable times or be positioned in odd ways.  They appeared interesting, but the best she could do was put two paws on my leg and lay her head down.  Then one day a fluffy lap blanket appeared and that’s when we learned she loved loved loved fluffy blankets.  If a fluffy blanket presented itself, she’d hop over to my newly fluffied lap and go to sleep.  It took a bit longer for her to realize that legs were the things supporting fluffy blankets and once that light bulb went off, she became a lap cat (though a blanketed lap was preferred and the moment she’d see me lay a blanket in my lap, she’d perk up and start angling for quality lap (blanket) time).

She was funny.  Her favorite pastimes included: stealing the dog’s beds (yes, beds – all of them), trying to steal the dog’s crate, stealing the dog’s under-the-desk cave, blocking the dog from going down the hall or approaching me (this latter pastime would cause serious protests in the form of pitiful whimpering and pleas for me to escort said dog around the kitty roadblock).

She was gentle.  I could bathe her (something long haired rumpies need help with on occasion),  I could pill her easily and I could drive her around without much complaint other than a mrr of protest.  She never bit and rarely swatted (swatting was reserved for when humans would tease her with waggling hands).  The vet and their assistants always said she was super easy to handle (like her sister); she just had a really pleasant temperament.   If something unpleasant was happening, I only needed to extend my hand and she’d rub her face for comfort and I’d rub her forehead.

She would tuck me in.  In fact, the whole house tucks me in and they wait until I fall asleep before clearing the room.  If she was still hanging out on the bed and I was in the middle of tossing and turning, she’d gently pat my hand (how she’d tell me she’d like kitty rubs) and purr me to sleep.  If I paced around the house, which I do sometimes at obscene times in the morning, she’d hop into my lap, pat me and in turn get her pats until I could settle down enough to sleep.  And then my favorite, those moments where she’d rest her forehead against mine.

I miss her pats.  Pats said, “I’m here.” or “I’d like you to lift me to my bowl” or “I just want you to stroke my face for a bit, please”.  A pat followed by a mrr was her way to emphasize the importance of the request.

I miss that gentle paw softly tapping my leg  – softly reaching for my hand.

I didn’t realize that the Monday before last would be the last time she’d hop into my lap at 2:30am and purr us to sleep; I wish I’d stayed in that moment a bit longer. By Friday, she was no longer able to move – unable to reach her bowl that was strategically placed next to her muzzle – all related to complications from her recently diagnosed diabetes that mysteriously almost sent her into an insulin coma (possible pancreatic tumor) with a glucose level so low it was “barely able to sustain life.” The incident left her so weak she couldn’t use her back legs (initially), which they believe led to her injuring her back.  She appeared to be in great pain.

I rubbed her face on Friday and urgently explained that I really needed her to get up – that I didn’t want to be in a world that she wasn’t in, but she laid there looking vacantly towards the door, occasionally closing her eyes as I’d find that perfect spot on her nose. Gone were the days where we’d sit and quietly contemplate one another.

On Saturday we took her into the vet one last time and stroked her fur.  The vet promised to give her kisses.

I hope for a “What Dreams May Come” heaven where I will find you.  I hope you’ll look for me, too.

A woman gleefully declared on Monday, “it’s time to find a new cat!” and my response, “the only cat I want to find is Hodi.” 16 ½ years just wasn’t nearly long enough for me.  It will never have been enough.

Join 548 other subscribers
Follow The Big Blue Mess on WordPress.com