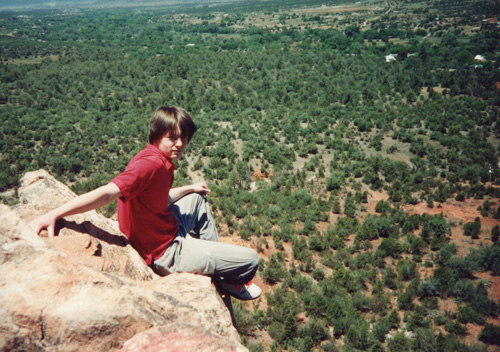 There wasn’t an official obituary announcing to the world the loss of my husband. Of all the things we had to deal with that day, and for the days that followed, this was one we pushed to the side. If you planned well, or worked with any funeral service, someone will likely handle this detail. We did not. We were reeling.

I learned that in trying to settle Jay’s affairs that there are companies who really would like one to prove a death has occurred by means of an obituary. I suppose a medical examiner’s report or a death certificate doesn’t carry the weight that an obituary posted in the newspaper does.

So, I give you this – for all the people who need one…

A memorial was held at 10am on Wednesday, July 13, 2016 at Restoration Covenant Church in Round Rock with Jay’s aunt, the Rev. Marsha Emery officiating.

Jay is survived by his wife, Beth Doughty; his sister and brothers Enid Celeste Kowalik, Joel Samuel Utz, and Dale Eldon Utz; his parents, Lois Margaret and Samuel Franklin Utz; and his nephews and niece, Everett, Zachary and Katy Kowalik.

Today we say goodbye to a husband, a son, a brother, an uncle, and a friend who left us all too soon with so many words left unsaid, so many adventures left to do, so many wry/sardonic laughs left un-chortled, and so much love left unexpressed. For me I’m saying goodbye to my best friend, my confidante, my co-conspirator, my teacher, my hero, my voice of reason, and the only adult in the house.  And today and for all the days to come, I’m also saying goodbye to my very favorite person in this world.  The best person I know.

Monday was our 202nd Monthiversary which celebrates the day we started dating – it’s a ridiculous holiday unless you’re us. It also happens to be my very favorite.  This was the day I’d try my level best to wish him a Happy Monthiversary first.  I never really told him we were in competition, but still he almost always managed to win.

And this is also one of the thousands of things I’ll miss.

Jay was the person who stayed with me each night until I fell asleep.  Then he’d be there when I’d wake in the middle of the night to ask important questions like: What’s the difference between alternating and direct current? Tell me about stationary objects in motion.  And he’d patiently answer until I was satisfied I completely understood and I’d wander off to fall back asleep. I suspect he shook his head when my back was turned, but I have no proof.

On the plane Saturday I realized I didn’t completely understand how planes generated lift, so I made a mental note to discover this information on our ride home.

There wasn’t a ride home – not with Jay, not on this Saturday when my best friend felt he had to leave.

Someone suggested I might be angry, and if I’m angry about anything it’s at this faceless disease called depression.  I’m angry that it took away the best person I know.  I’m angry it made him feel worthless and that it blinded him to being able to realize how amazing he truly was.  I’m angry that he tried and didn’t get the help he needed to fight it.  I’m angry it made him see so much bad about himself when all I could ever see was good and kind and beautiful, and he was absolutely beautiful. It robbed me of laughs, of the one person who understood me, of a thousand inside jokes, and a thousand more kisses.  It took away our ridiculous Monthiversaries, and it took away my favorite person.

I love you, Jay. You said I deserved better, but there will never be better than you.  You are the love of my life, and I miss you so much.

Jay’s brother Dale also spoke and shared personal stories that helped further bring to life a person whom we will all miss dearly – with whom we’ll never get to share another laugh, nor enjoy another character like “Laguardia”.